Skip to main content
Home » Our Eye Doctor in Montrose 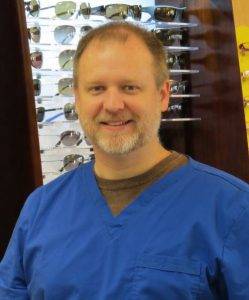 The eye care professionals at 1 Hour EyeDocs specialize in understanding how the human eye really works, as well as diseases and conditions that affect your vision - many of which do not have obvious symptoms. Eye doctors know how age and risk factors affect vision over time for young and old, and they understand the benefits and features of corrective lenses including eyeglasses and contact lenses.

Our optometrist will take the time to explain the results of your eye exam, describe your options and listen to your eye care needs. Because maintaining good eye health is an ongoing partnership, we encourage you to ask questions and share your health information, which could be vital to monitoring, diagnosing and treating potential vision problems. 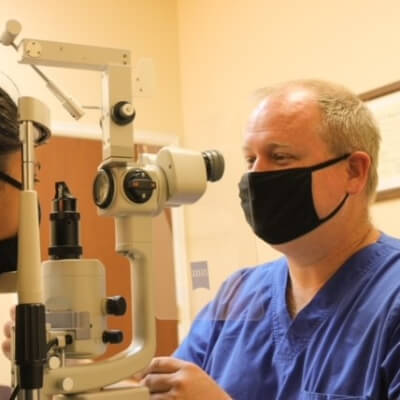 Dr. Buck Buchanan O.D. is no ordinary eye doctor. Dr. Buck was an Army brat but his dad retired from Army when he was still pretty young and a lot of his growing up was in Laurel, Mississippi. It was here he attended high school and the undergraduate part of his college experience. Career choices come to different people in different ways. As a child, Dr. Buchanan always loved science. In college, he got a job as an optical lab tech where he made the lenses and cut them out to put in eyeglasses. There were optometrists next door and he showed so much interest in their profession that they would pull him over when they were working on something really interesting. After graduating from University of Southern Mississippi (GO EAGLES!), he went to the Southern College of Optometry in Memphis, Tennessee and has been in practice since 1998. While treating the entire family, Dr. Buchanan specializes in diabetic eye care and pediatrics (being 'on the kids’ level). Children and teens actually enjoy coming to see Dr. Buchanan because they are very much a part of the process and leave the practice seeing better and looking great. He recalls one such student of about 10 or 11 years of age. Her parents had brought her to see Dr. Buchanan because her grades were slipping, she had really bad headaches, and her doctors couldn't figure out what was going on. The eye exam showed she was very far sighted and it was easy enough to fix. She returned to the practice a couple of days later with the biggest smile on her face. Her parents reported that their daughter had put up a fuss in order to come back and tell Dr. Buchanan, ‘thank you’. What an awesome day. Little did Dr. Buchanan know that the patient was also a Girl Scout and the office has overflowed with Girl Scout Cookies ever since. Treating dry eyes is another specialty of Dr. Buchanan. In this case, bringing relief to people in pain and suffering from a very treatable eye condition. Dr. Buchanan does his job so well that in 2010 he was awarded “Doctor of the Year 2009”.

For fun Dr. Buck has two little boys that keep him pretty busy when not working. They enjoy going to sporting events, music lessons, or jumping on the trampoline. Might be an occasional nerf gun war that breaks out here and there. For personal fun he enjoys reading (especially sci-fi), travelling, and rarely snorkeling.